So I realized a few hours after posting that first entry on here that I wasn't exactly right on saying that I'll be keeping Jason's original design. Before people freak out, it's really only just because I realized I want to either start his story before he was on Veyrra or show portions of his life before (I'm trying to settle on either of those two options, which is why I've been working on Ardien's story first) While I was trying to draw them myself I did a design for him that would have sort of work for both, but since I'm back to using base resources ( I'm not really the best artist ever and it would've taken way to long to draw ever character and all their expressions on my own) I decided to do this instead: 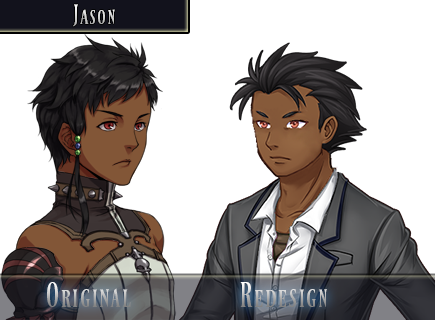 It doesn't entirely look similar (and that's more a problem with what I have on hand and my photoshoping skills) but it works for now. If  can't get some kind of team together to help out, I'll probably lean towards just editing the redesigned one in some way to fit in with Veyrra's sci-fi/fantasy setting.

Also, I've only gotten 2 votes on the poll so far about which format people would like so I'm going to repost it in case anyone else wants to give an opinion (here's the link) I'm thinking that if I really do it all as one project I might have to do it in MV rather than Visual Novel Maker (VNM is still slightly unstable; it's a good engine, but I'm not sure if I'd be able to make a long game with all of the engine's quirks. Thankfully, it shouldn't matter too much either way)